(Humanity is nuts! Let me explain why...)

So we need to go off on a tangent a bit but this will provide the foundation for what's going on in the world today...

semi-Quick History of the world

The video below addresses:

I know I know, that was a lot to digest. So I will analyze some of the concepts from that video to better explain.

The Garden of Eden

Everyone knows the story in Genesis. Satan entered the garden of Eden as a snake and tempted Eve by making her question what God had told her. She ate of the fruit and the rest is history. But let's look at what Satan specifically said, “You will not surely die.  For God knows that in the day you eat of it your eyes will be opened, and you will be like God, knowing good and evil.” So, from the very beginning man has been trying to be like God.

We will come back to this later. For now here are a few videos regarding Nimrod and his family:

Here's a part of a Jack Chick explaining the connection beween Nimrod/Semarimis/Tummuz and the :

So there you have it - the explanation for the ancient mystery religions all around the world.

It is important to understand the goddess/child worship and mystery religions ALL have the same belief system at the core. This chart shows how over time the mysteries have evolved into other organizations. Note they are all leading to the New Age Movement. 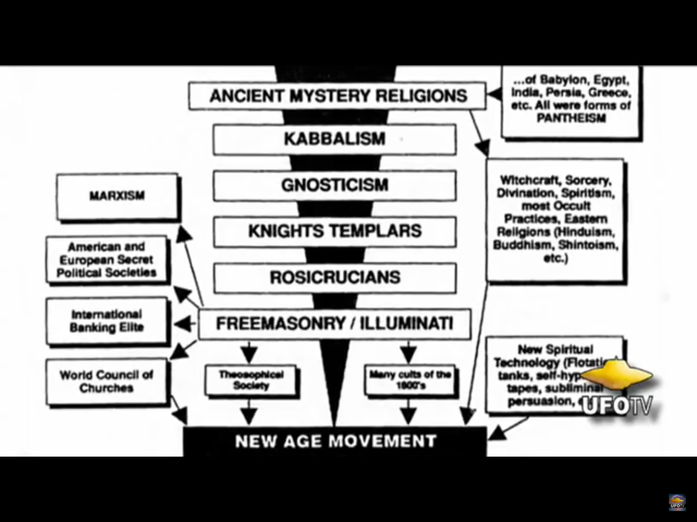 We won't go into all of these but we will touch upon a group that is prevalent currently.  This group is known as the Freemasons...

Truth of Freemasonry:
Here's a longer video with lots of verifiable info:
Dawn of the Eastern Star (masonry for women):
More on Freemasons. Note Fraternities/Sororities were also created by the masons. About an hour into this video, the presenter gets into the masonic infiltration of the African-American community:
Overview of masonic handshakes:
World leaders using these handshakes:
Masonic Signs:

Moving on to symbols, I will focus on this area a bit to demonstrate how immersed we are in symbols daily.

Per www.SymbolDictionary.net, "In the world of the occult, many symbols are imbued with power by the magician working in conjunction with the demonic spirit world. The Wiccan leader Starhawk, founder of the Covenant of the Goddess, knows that well. 'To cast a spell is to project energy through a symbol,' she wrote in The Spiral Dance, her popular manual for witchcraft."

Here are many common symbols many of we we see daily, in logos, on clothing, and represented by famous personalities in the media: 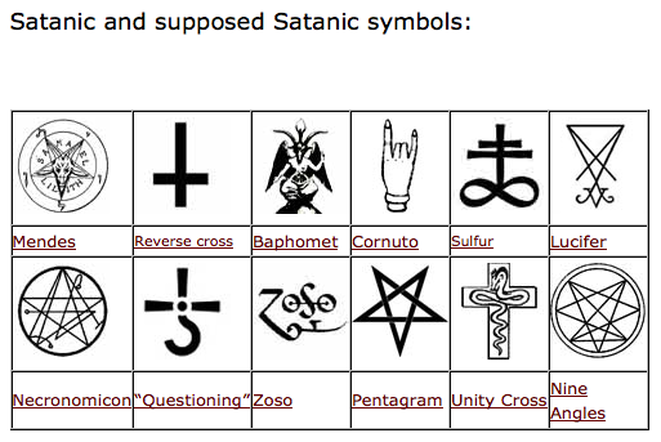 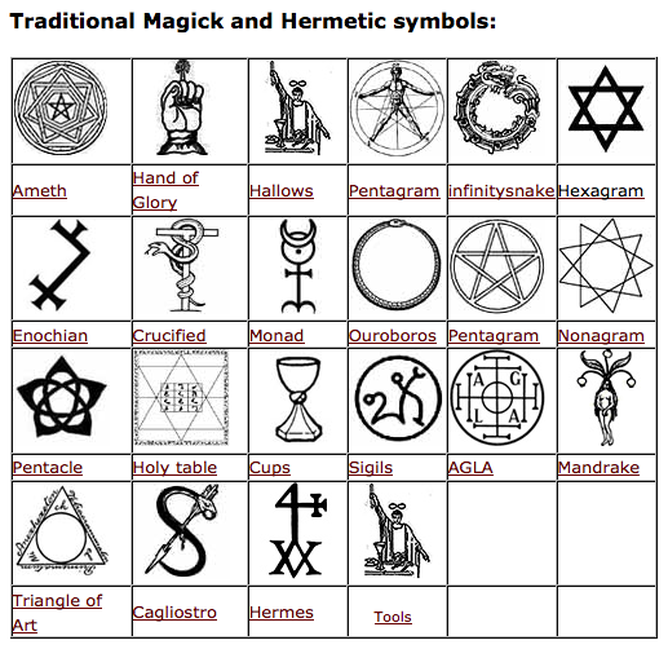 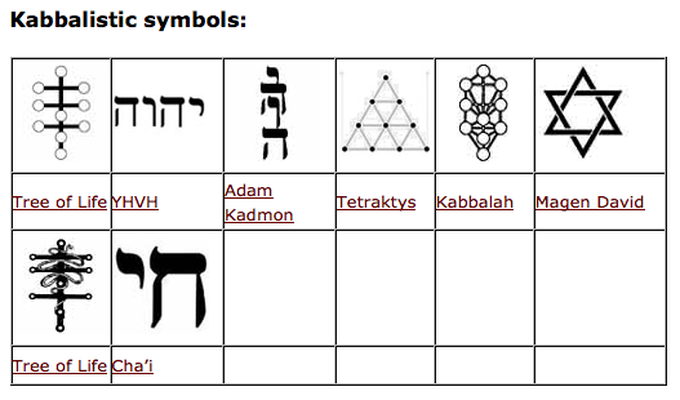 A brief list of the main symbols most often used, with explanation of them:
http://www.christian-restoration.com/occult/symbols.htm

This video covers the same symbols above. You can skip to 1 hour 10 minute mark (when he begins the slideshow) and it ends at about 1 hour 46 minutes (when he starts getting into occult symbols in jewelry):
Occult symbolism in Corporate Logos:

Here are the examples of articles showing those symbols used in everyday corporate logos: 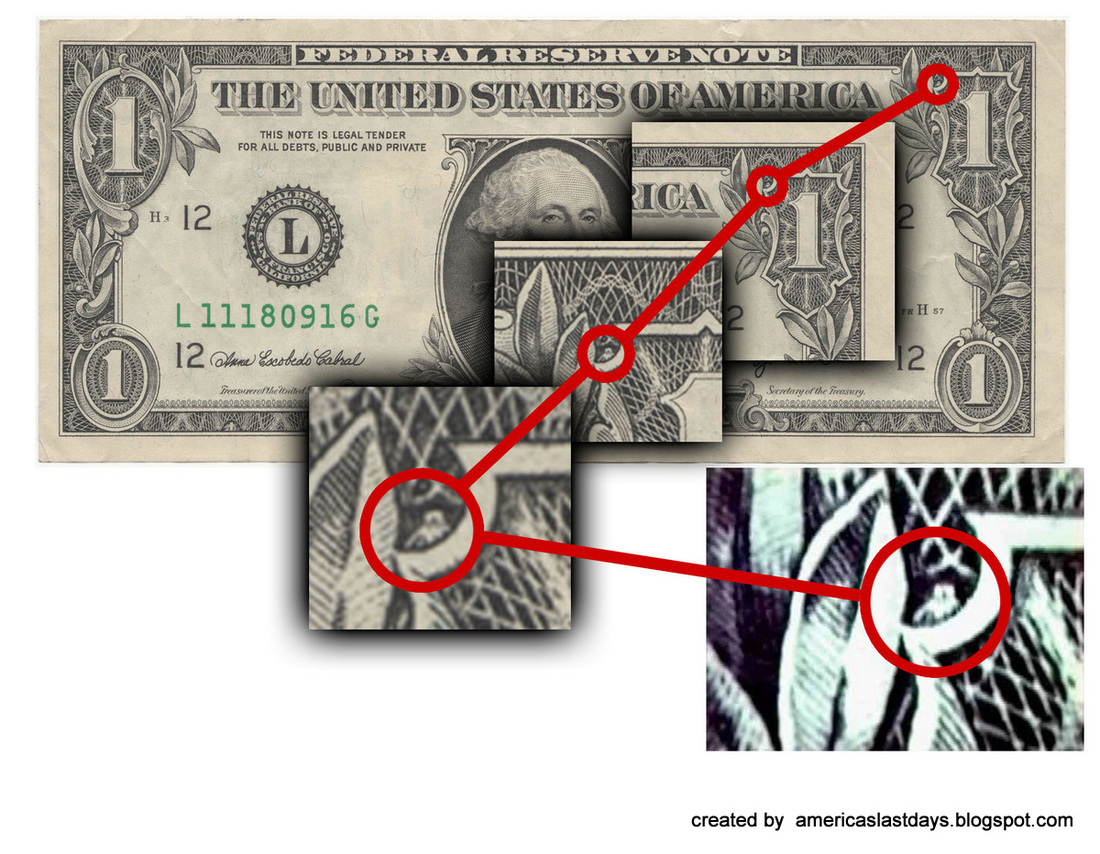 And what do you know, a masonic connection. Draw a hexagram, look at the letters highlighted and they spell...: 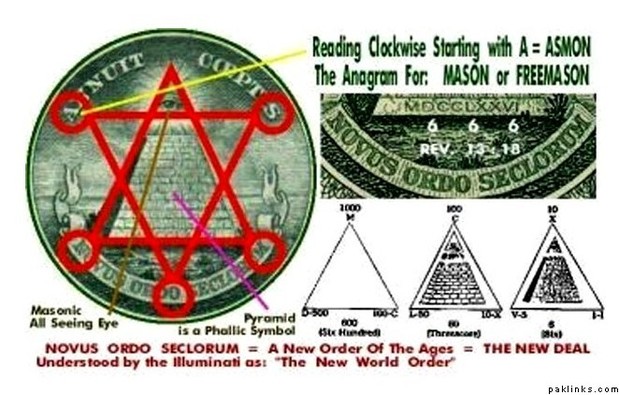 Further confirmation from a 1960 masonic publication: 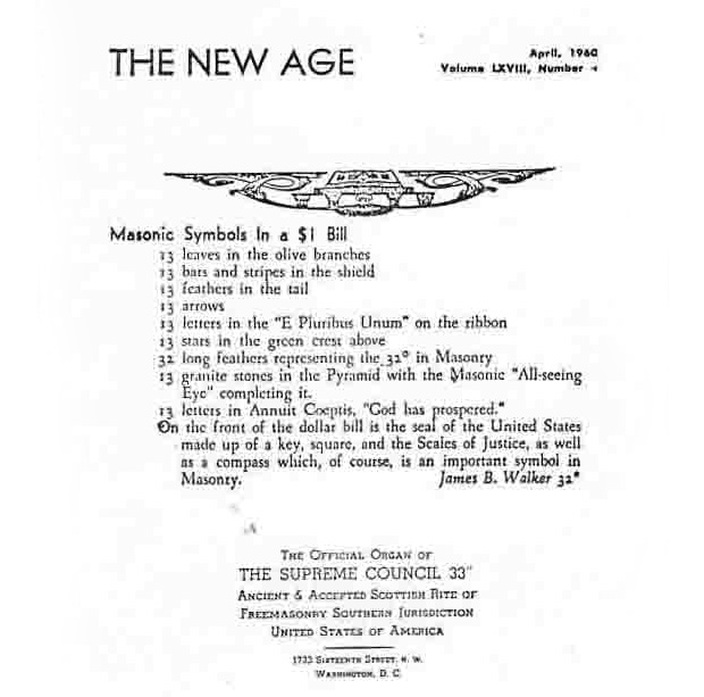 Here's a video on the US $1 Bill:
Occult symbolism in worldwide government architecture:

For the sake of time I took these from the same website I often refer to that does a series called Sinister Sites.

*Note the Rockefeller family is not the literal government but can be thought of as the shadow government - they pull the strings.*

Occultists place much faith in the inherent power of numbers (not to be confused with Numerology of the bible). No plan of action can be carried out without first determining two things:


This process is "Divination" and is specifically prohibited by God. (Deut 18:10-11)

Once you understand how occultists think and calculate, you will be able to see occultism in world events. This effort to determine the correct time for an action is carried out to precise days and times. A good example is the suicide of Adolf Hitler. Hitler chose the date, April 30, 1945, because it was the first day of the Pagan Spring Holy Days. He chose 3:30p.m. because, according to occult doctrine, this combination of three's presented to him the most favorable time to depart this life and reenter the reincarnation cycle. Note the triple 3's present here, April 30 as the first three, 3 o'clock in the afternoon as the second three, and 30 minutes past the hour is the final three. Hitler was engaging in typical occult behavior by arranging the timing of his death in a very precise, numeric manner. Hitler wanted to exit this life in such a proper time that he could come back quickly, as the real Anti-Christ.


1. Three (3) is the first sacred number, the first perfect number (Westcott, p. 41). Three represents the Pagan Trinity." (Westcott, p. 37). It is represented in the triangle, and spiritually as the Third Eye Of Hinduism. Occultists will multiply and add three to other sacred numbers to create new numbers. However, they also group threes in two's and threes, because they believe in the principle of "intensification", i.e., that greater power is achieved when a sacred number is grouped. In the case of three, greater intensification is achieved when it is shown as 33, or 333. 333 + 333 equals 666. Occultists have used 333 as the hidden symbol by which they present the more offensive number 666. When the details of an event are so arranged as to contain certain sacred occult numbers or numeric combinations, this is literally an occult signature on the event. Mathematically, 666 can be created when three pairs of threes are added. Thus, (3+3) + (3+3) + (3+3) = 666. Now, eliminate the parentheses and the plus sign, and you have 33 space, 33 space, 33, representing the number 666.

2. Six (6) is the next sacred number, representing the number of the soul of man (Westcott, p. 66). This shows the omnipotent power of God, as this belief parallels Revelation 13:18, where God assigns 666 to man and to the beast. Six is also believed to be "all-sufficient". This parallels Biblical teaching, which states that man's great sin is pride in himself.

3. Seven (7) is a sacred number. Van Buren calls 7 "one of the most sacred of all the numbers...the Invisible Centre, the Spirit of everything" (p. 39). Since multiplication of seven creates an even more powerful sacred number, we should not be surprised that 3x7, or 21, is considered powerful. Thus, when Adam Weishaupt formed the Illuminati, he arranged the timing of the event by arranging the numbers in a manner which would add to powerful numbers. He chose May 1, because May, month #5, added to the first day, equals 6. Weishaupt chose 1776, because the four numbers of this year add up to 21 (1+7+7+6 = 21). Further, the number 6 + 21 = 27, another number of power, because it is formed by the multiplication of 3x9. This date was very carefully chosen by Weishaupt; he believed the greatest Plan is doomed to failure if it is not carried out in the most numerically advantageous time.

5. Eleven (11) is a sacred number. When eleven is multiplied by the perfect number 3, the number 33 is produced, a number of tremendous occult importance. In 1933, Adolf Hitler and President Franklin Roosevelt came to power. Both these men were committed to the establishment of the New World Order, and their actions impacted humanity greatly. It was also in 1933 that the First Humanist Manifesto was issued. Do you see how Satan manipulated world history to produce three New World Order events in 1933? Thus, a powerful 333 served as a framework for world events in that year.

6. Thirteen (13) is deemed sacred. It was also no accident that Hitler chose the year 1939 to begin World War II, because 39 is formed by the multiplication of 13x3. Thus, you can see how human history has been shaped by the occult belief in the power of numbers. We have provided much detail as to how history has been shaped by this belief in the power of numbers. You can get this information in our Cutting Edge Radio Program dated May 9, 1992, entitled, "33 33 33 = 666 New Age Numerology".

Here's another article which covers a few more numbers:
http://helpfreetheearth.com/news565_numbers.html

There are many symbols and gestures that are given by people in the media CONSTANTLY that have an occult meaning. Here they are so you can learn to recognize them: 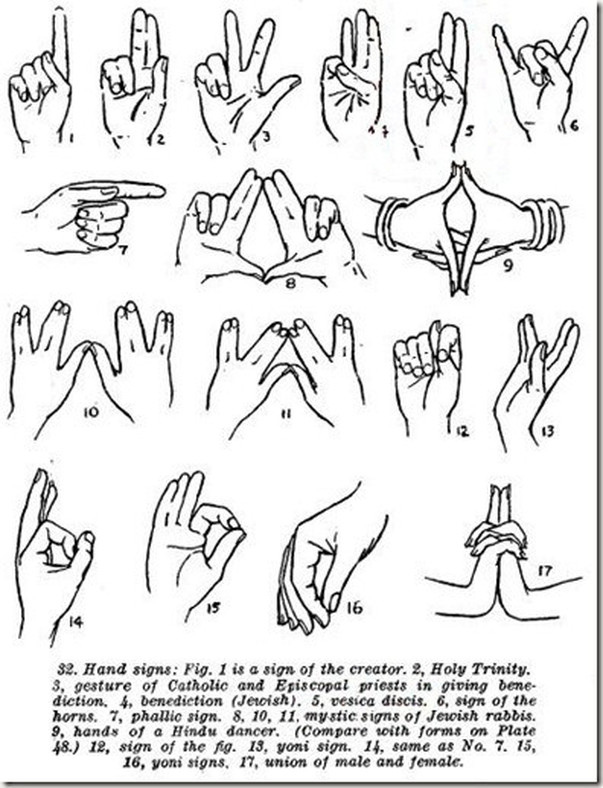 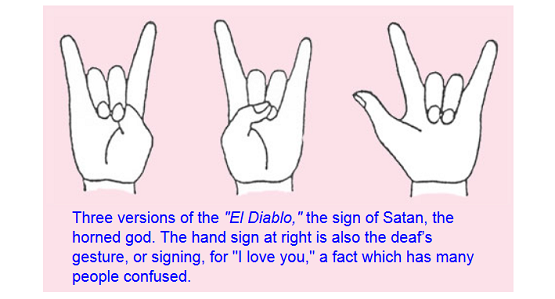 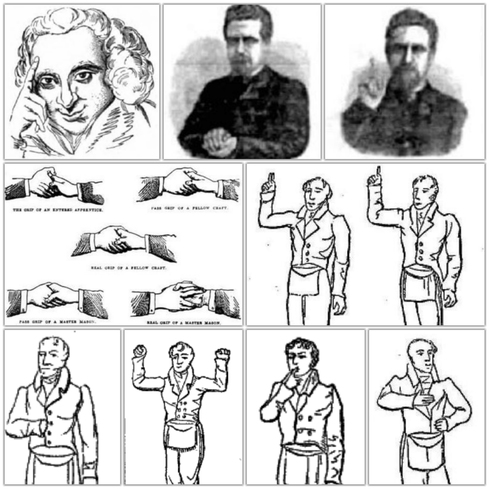 From above, "the hidden hand":
http://www.whale.to/b/hand_sign.html


The 12 masonic signs of recognition:
http://waitingtorot.blogspot.com/2007/11/12-masonic-signs-of-recognition_27.html

Eye of Horus Satanic/Lucifer symbol for the ever watching, all seeing occultists. Subconsciously this would act like any Big Brother symbol.  We have all had many previous lives where these sort of symbols were in use overtly, along with the fact we all know Big Brother exists subconsciously, so you can imagine the effects.

Literally every famous "star" we can think of is in this picture (based on occult symbols previously mentioned you now know why they are called "stars"): 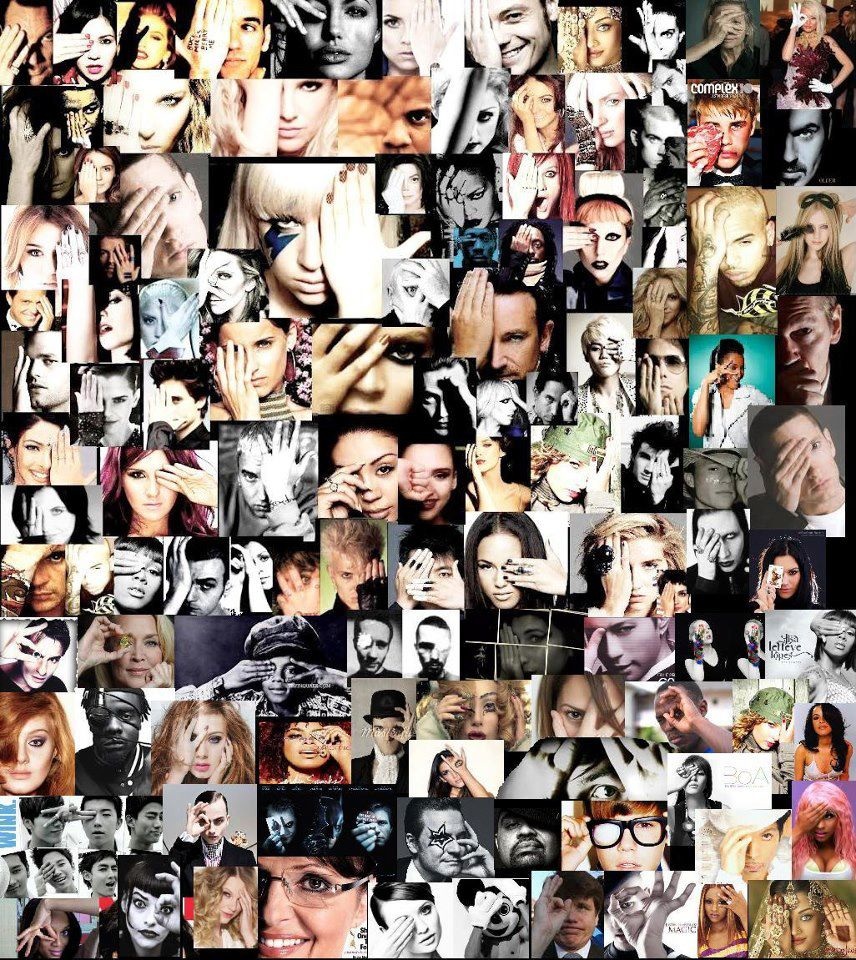 Per Wikipedia, a False flag describes covert operations designed to deceive in such a way that the operations appear as though they are being carried out by entities, groups, or nations other than those who actually planned and executed them.

The Warning Signs of a False Flag Operation:

~There is an immediate comprehensive narrative, including a convenient culprit. Law enforcement, government agencies, and the mainstream media immediately proffer a narrative that completely explains the event and encourages citizens to tie their intellectual understanding of the tragedy to the emotions they experience. In his lecture at Contact in the Desert, Richard Dolan noted that a distinguishing characteristic of a false flag operation is that the official narrative IS NOT questioned by the media. There are often legislative, ideological and sociopolitical power plays waiting in the wings, which the government can immediately implement. The most striking example of this is the Patriot Act, which was written well before 9/11 but seemed to correlate entirely with the events that had transpired.

~The official narrative has obvious domestic and geopolitical advantages for the governing body. The Bush administration used 9/11 to usher in the War on Terror, which has served as a lynchpin for countless civil liberty infringements by the national security state, including ubiquitous domestic surveillance and indefinite detention. It also directly paved the way for an invasion of Afghanistan and Iraq—countries that had nothing to do with the attacks—allowing our government and defense contractors to control the natural gas pipelines and oil fields. This bears a striking resemblance to Operation Ajax.

~The narrative behind the attack serves to leverage emotions like fear, as well as patriotism, in order to manufacture consent around a previously controversial issue. For example, many of the recent domestic terror attacks, including the Aurora shooting, have exacerbated and reinforced advocacy of gun control legislation. More importantly, these attacks divide populations and invite the government and militarized local police forces to have the authority to declare martial law at will, locking down entire neighborhoods. We saw this after the Boston marathon bombing, the most striking example of this nation’s post 9/11 police state mentality.

~Military training drills and police drills occur on the day of and very near the attack itself, causing confusion to obscure eye witness testimony and allowing orchestrators to plant both patsies, disinformation and backup operatives. This is no small point. An incredible percentage of major domestic or international terror attacks have involved simultaneous “training drills.” This list includes, but is not limited to, the infamous NORAD drills of 9/11, the 7/7 London Bombings, the 2011 Norway shooting, the Aurora shooting, Sandy Hook, and the Boston Marathon. Though none of the aforementioned events can be confirmed or denied without a doubt, they bear a striking resemblance to previous false flag attacks and should be looked at with an investigative eye.