Clue #3: After "the Fifteenth Year of Tiberius Caesar"

The Gospel of Luke tells us when the ministry of John the Baptist began:

In the fifteenth year of the reign of Tiberius Caesar . . . the word of God came to John the son of Zechariah in the wilderness [Luke 3:1-2].

This picks out a specific year: A.D. 29. Since all four gospels depict the ministry of Christ beginning after that of John the Baptist had begun (Matthew 3, Mark 1, Luke 3, John 1), this means that we can shave a few more years off our range. The death of Christ had to be in a range of seven years: between A.D. 29 and 36.

Clue #4: Crucified on a Friday

All four gospels agree that Jesus was crucified on a Friday (Matt. 27:62, Mark 15:42; Luke23:54;  John 19:42), just before a Sabbath, which was just before the first day of the week (Matthew 28:1, Mark 16:2, Luke 24:1, John 20:1). We know that it was a Friday because it is referred to as "the day of preparation"--that is, the day on which Jews made the preparations they needed for the Sabbath, since they could not do any work on that day. Thus thus cooked food in advance and made other necessary preparations. The Jewish Encyclopedia states:

Friday, as the forerunner of Shabbat, is called "'Ereb Shabbat" (The Eve of Sabbath). The term "'ereb" admits of two meanings: "evening" and "admixture" (Ex. xii. 38); and "'Ereb Shabbat" accordingly denotes the day on the evening of which Sabbath begins, or the day on which food is prepared for both the current and the following days, which latter is Sabbath.

Clue #5: A Friday at Passover

The gospels also agree that Jesus was crucified in conjunction with the annual feast of Passover (Matthew 26:2, Mark 14:1, Luke 22:1, John 18:39). Here we encounter a momentary complication, because Matthew, Mark, and Luke describe the Last Supper on Holy Thursday as a Passover meal (Matthew 26:19, Mark 14:14, Luke 22:15). That would suggest that Good Friday was the day after Passover. However, when describing the morning of Good Friday, John indicates that the Jewish authorities had not yet eaten the Passover meal:

Then they led Jesus from the house of Caiaphas to the Praetorium [i.e., Pilate's palace]. It was early. They themselves did not enter the Praetorium, so that they might not be defiled, but might eat the passover. So Pilate went out to them [John 18:28-29a].

That suggests that the Passover would have begun on sundown Friday. There are a number of ways of resolving this. For example, some have suggested that Jesus and his disciples used a different calendar than the Jewish authorities, and we know that there were different calendars in use in first century Judaism. It's also possible that Jesus just advanced the date of the Passover celebration for him and his disciples. I mean, they were already convinced he was the Messiah and the Son of God. If he says, "We're celebrating Passover today," and it's a day earlier than most people, they'd just go with that. (Note that he made other modifications to the ceremony, such as instituting the Eucharist in the midst of it.) And there are other solutions. However, regardless of what Jesus' movement did, we can look to John's statement about the Jesus' captors as an indication of what the Jewish authorities or the mainstream Jewish practice was: They were celebrating a Passover beginning on what we would call Friday evening. Lets us narrow down the range of possible dates to just a few. Here is a complete list of the days between A.D. 29 and 36 on whose evenings Passover began:


As you can see, we have just two candidates left: Jesus was either crucified on April 7 of A.D. 30 or April 3 of A.D. 33. Which was it? The traditional date is that of A.D. 33. You will find quite a number of people today advocating the A.D. 30 date.

The Gospel of John records three different Passovers during the ministry of Jesus:


That means that the ministry of Jesus had to span something over two years. A fuller treatment would reveal that it spanned about three and a half years, but even if we assume it began immediately before Passover #1, the addition of two more Passovers shows that it lasted more than two years at a bare minimum. This means the A.D. 30 date is out. There is not enough time between the fifteenth year of Tiberius Caesar--A.D. 29--and the next year's Passover to accomodate a ministry of at least two years. The numbers don't add up. As a result, the traditional date of Jesus' death--Friday, April 3, A.D. 33--must be regarded as the correct one.

Clues #8 and 9: Earthquake and Eclipse

OK I know I said 7 clues but there's actually one more (well technically 2). The three of the four canonical gospels report darkness from midday to 3pm on the day of the crucifixion (an eclipse) and an earthquake that same afternoon. Per NASA website regarding the eclipse: 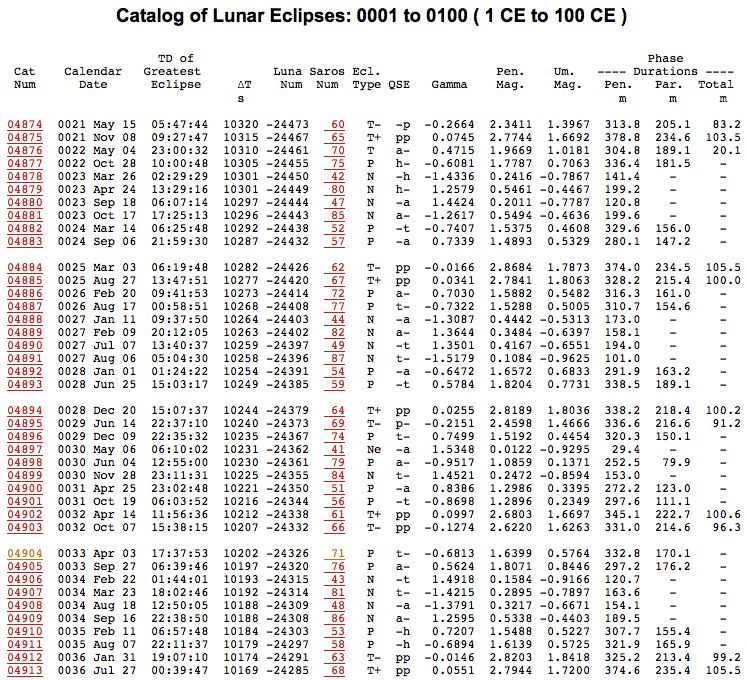 If you look above, item #04904 indicates there was an eclipse this very day, lasting 170m, which is just short of 3 hours:

At this point it is likely hard to avoid the repetition of the number 3.  Without going into great detail, the number 3 is considered a special number with great significance. The holy trinity comprises of 3 parts - God, Jesus, Holy Spirit. Also, it is on the 3rd day that God saves: Jonah is released from the belly of the whale on the 3rd day. Saul, soon to be known as Paul, regains his eyesight on the 3rd day. Of course, Jesus is raised from the dead on the 3rd day. Thus, 3 is a “good” number. So to see it repeated so often, particularly associated with Jesus' death, I find it hard to believe this as mere coincidence, particularly considering Jesus' age was 33 when he died. But hey, that's a whole separate study for another day...

How the Passover Reveals Jesus Christ

The festival of the Passover has been celebrated by Jews for thousands of years. It is the retelling of the great story of how God redeemed the Jewish nation from enslavement in Egypt. The celebration itself was given to the Jews while they were still in Egypt. The original celebration centered around the Passover lamb, which was sacrificed and its blood put over the doorposts as a sign of faith, so that the Lord passed over the houses of the Jews during the last plague poured out on the Egyptians - the killing of every firstborn. To a large degree, the Passover lamb has been eliminated from the Passover festival (with the only remnant being the roasted lamb shank bone). The New Testament says that Jesus is our sacrificial Lamb. The Passover lamb was to be a "male without defect," which is the same description given to Jesus. In addition, when the lamb was roasted and eaten, none of its bones were to be broken. This fact was also prophesied for the Messiah, whose bones were not to be broken. It was customary during crucifixion to break the leg bones of the person after a few hours in order to hasten their death. The only way a person could breathe when hanging on a cross was to push up with his legs, which was very exhausting. By breaking the legs, death followed soon by asphyxiation. However, in the case of Jesus, they broke the legs of the other two men, but did not break His, since He was already dead.

Much of the symbolism of Jesus' last Passover week is lost to us because we are unaware of the customs of the time. For example, Jesus came into the city of Jerusalem five days before the lamb was killed in the temple as the Passover sacrifice for the sins of the people of Israel. Five days before the lamb was to be sacrificed, it was chosen. Therefore, Jesus entered Jerusalem on lamb selection day as the lamb of God. The people did not understand the significance of this, since they greeted Him with palm branches and hailed Him as King, shouting "Hosanna," which means "save us." However, they were not looking for a spiritual Savior, but a political savior. Palm branches were a symbol of freedom and defiance, since Simon Maccabeus had entered Jerusalem with that symbolism. Jesus' reaction was to weep, since He realized that they did not understand the Messiah's purpose in coming.

The day Jesus was crucified was the day of the Passover celebration and the day that the Passover lamb was to be sacrificed. For the previous 1,200 years, the priest would blow the shophar (ram's horn) at 3:00 p.m. - the moment the lamb was sacrificed, and all the people would pause to contemplate the sacrifice for sins on behalf of the people of Israel. At 3:00, when Jesus was being crucified, He said, "It is finished" - at the moment that the Passover lamb was sacrificed and the shophar was blown from the Temple. The sacrifice of the lamb of God was fulfilled at the hour that the symbolic animal sacrifice usually took place. At the same time, the veil of the Temple (a three-inch thick, several story high cloth that demarked the Holy of Holies) tore from top to bottom - representing a removal of the separation between God and man. Fifty days later, on the anniversary of the giving of the law (Pentecost), God left the earthly temple to inhabit those who call on the name of Jesus through His Holy Spirit.

The festival of unleavened bread began Friday evening (at sunset). As part of the festival, the Jews would take some of the grain - the "first fruits" of their harvest - to the Temple to offer as a sacrifice. In so doing, they were offering God all they had and trusting Him to proved the rest of the harvest. It was at this point that Jesus was buried - planted in the ground - as He said right before His death. Paul refers to Jesus as the first fruits of those raised from the dead in 1 Corinthians. As such, Jesus represents the fulfillment of God's promise to provide the rest of the harvest - resurrection of those who follow the Messiah.

Christian symbolism in the Passover occurs early in the Seder (the Passover dinner). Three matzahs are put together (representing the Father, Son, and Holy Spirit). The middle matzah is broken, wrapped in a white cloth, and hidden, representing the death and burial of Jesus. The matzah itself is designed to represent Jesus, since it is striped and pierced, which was prophesied by Isaiah, David, and Zechariah. Following the Seder meal, the "buried" matzah is "resurrected," which was foretold in the prophecies of David.

It was during the Seder that Jesus proclaimed that the meal represented Himself and that He was instituting the New Covenant, which was foretold by Jeremiah, Ezekiel, and Isaiah.31 The celebration of this covenant has become the ordinance of communion in the Christian Church. At the end of the meal, Jesus took the unleavened bread, broke it, and said that it represented His body. Then He took the cup of wine, which would have been the third cup of the Seder - the cup of redemption. He said that it was the new covenant in His blood "poured out for you." It is through the sacrificial death and resurrection of Jesus Christ that we are declared clean before God, allowing those of us who choose to accept the pardon, to commune with Him - both now and forevermore through the eternal life He offers.

prophecies of messiah fulfilled by Jesus 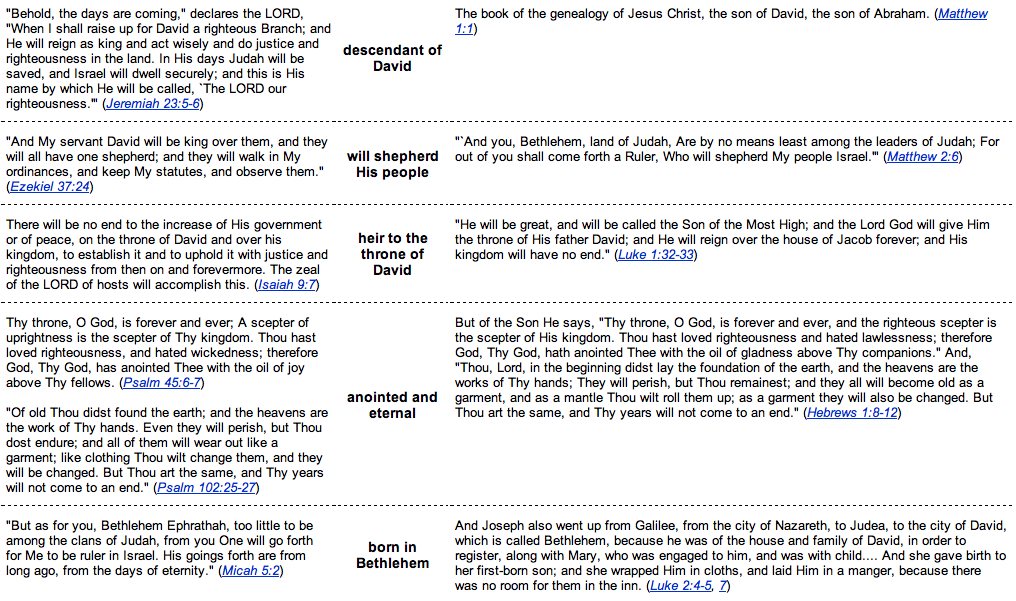 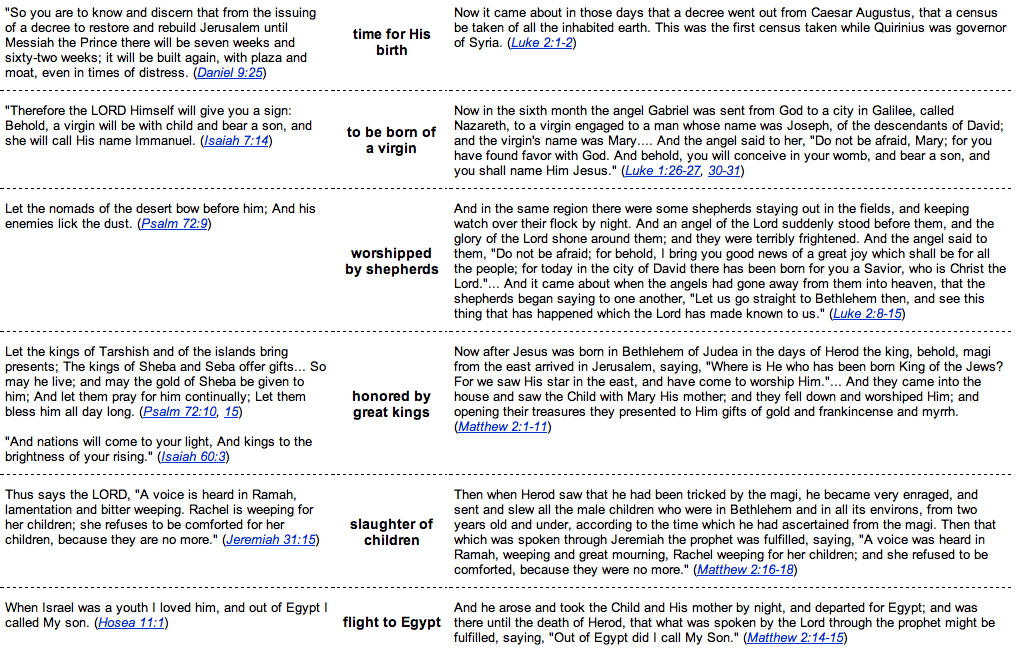 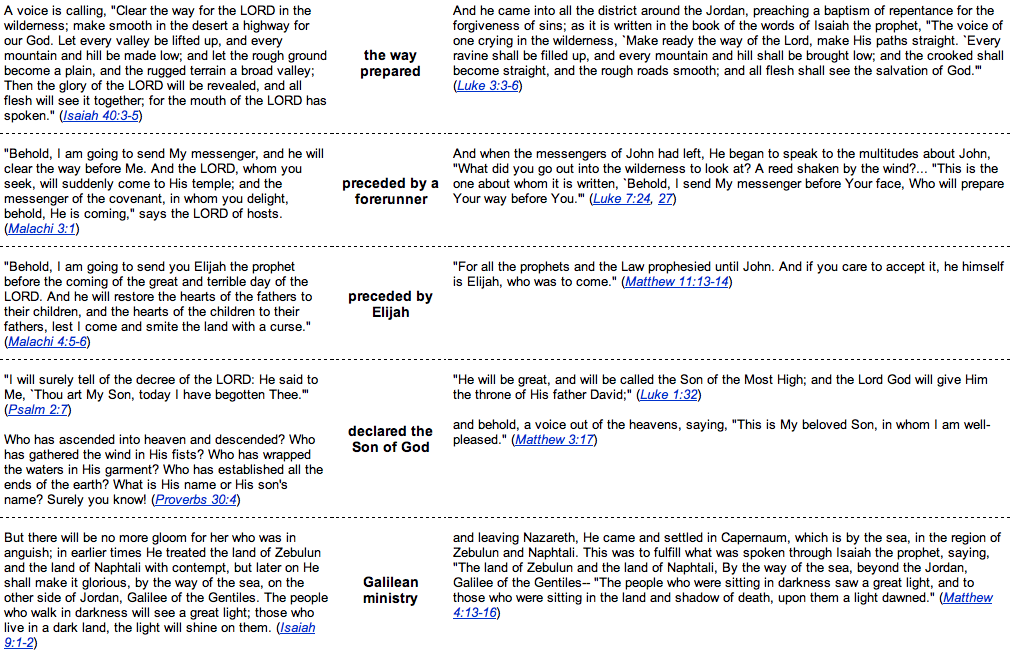 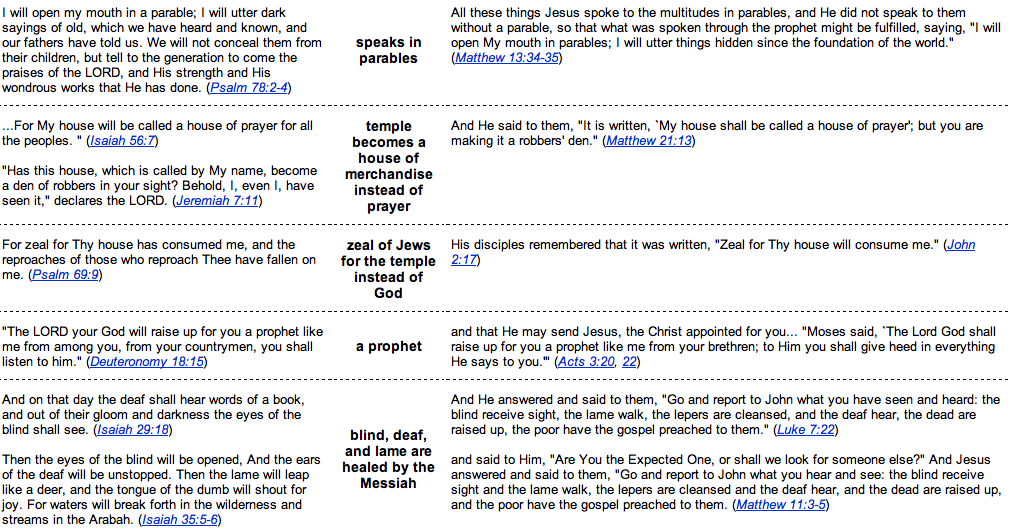 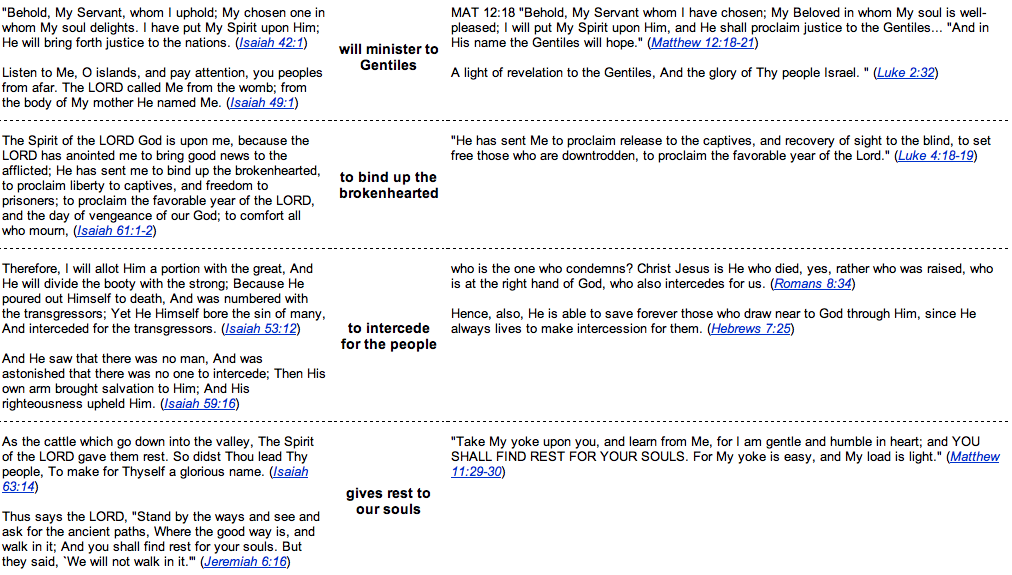 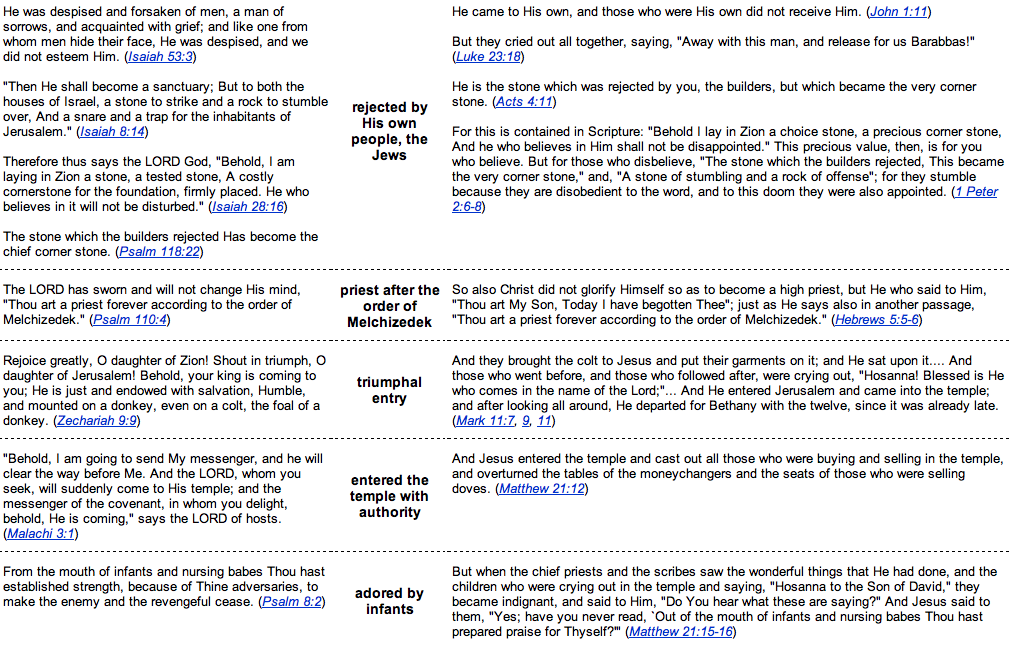 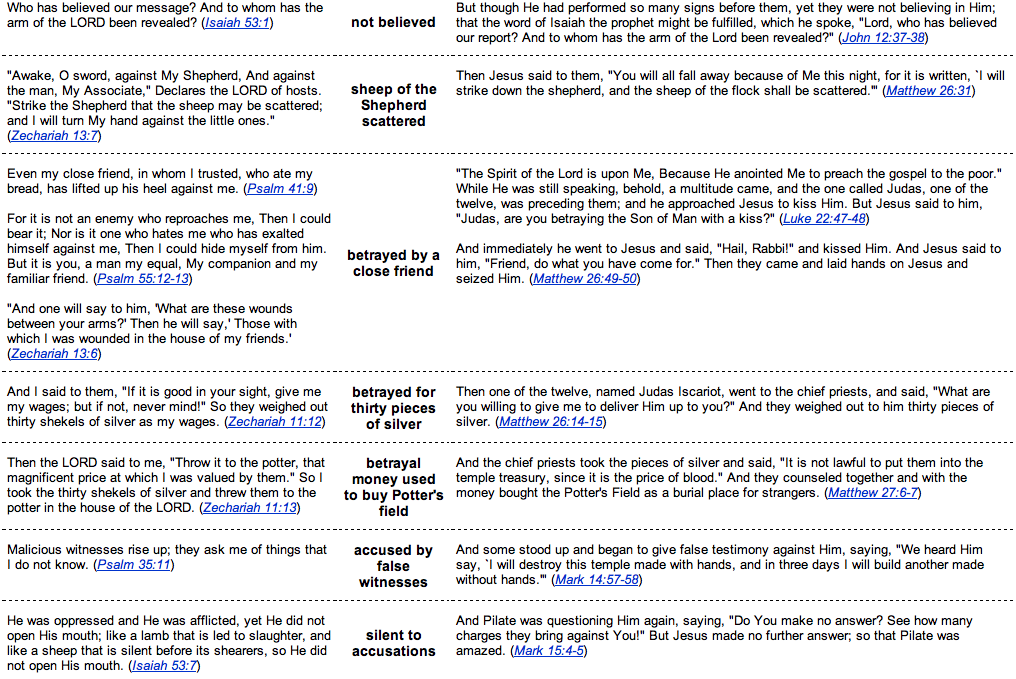 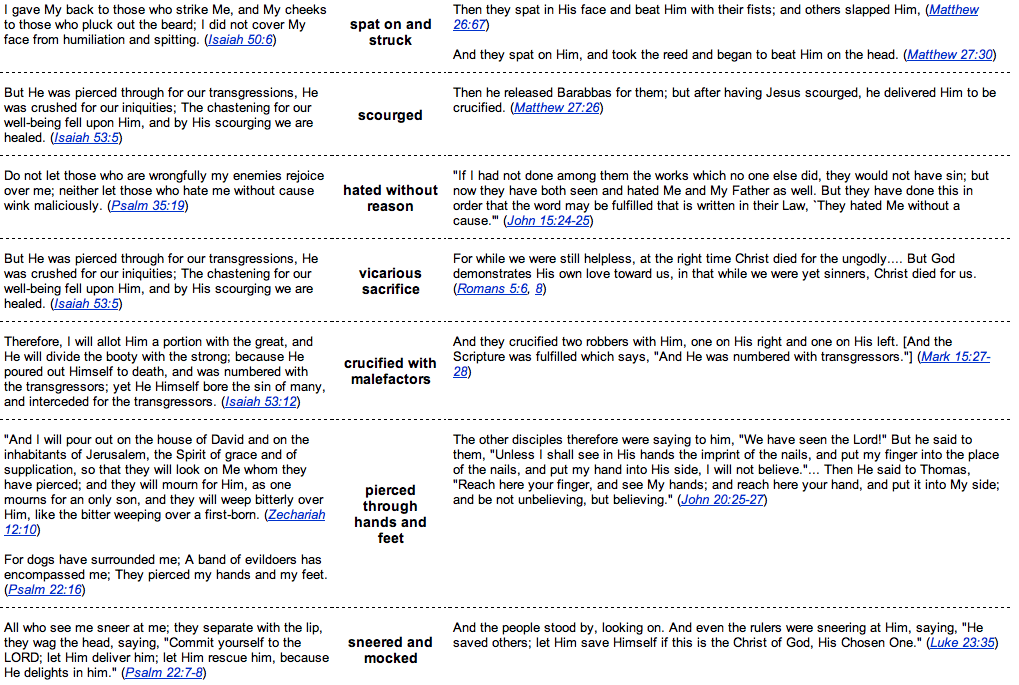 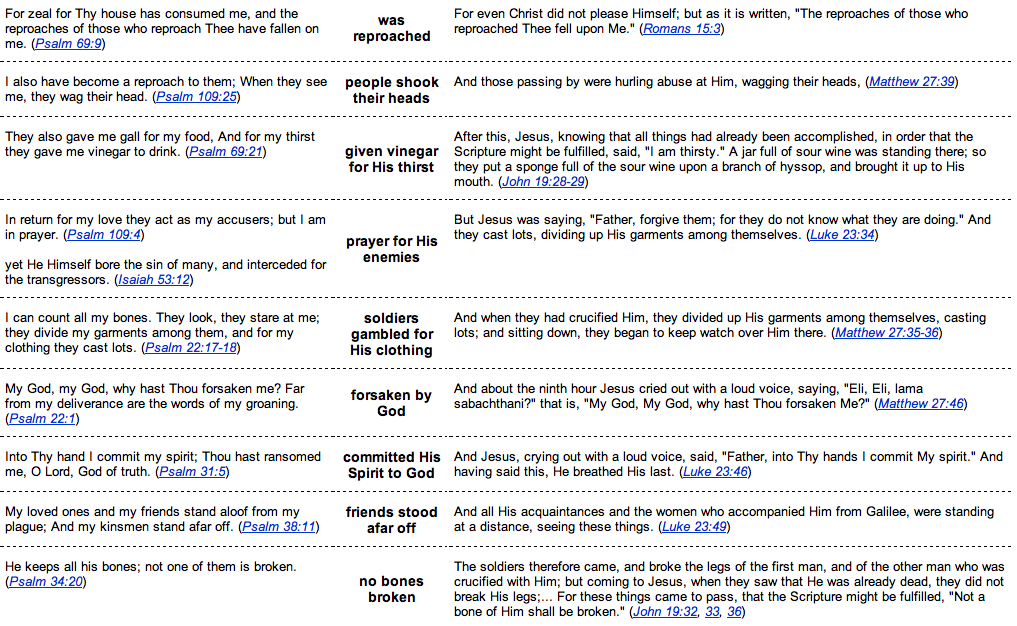 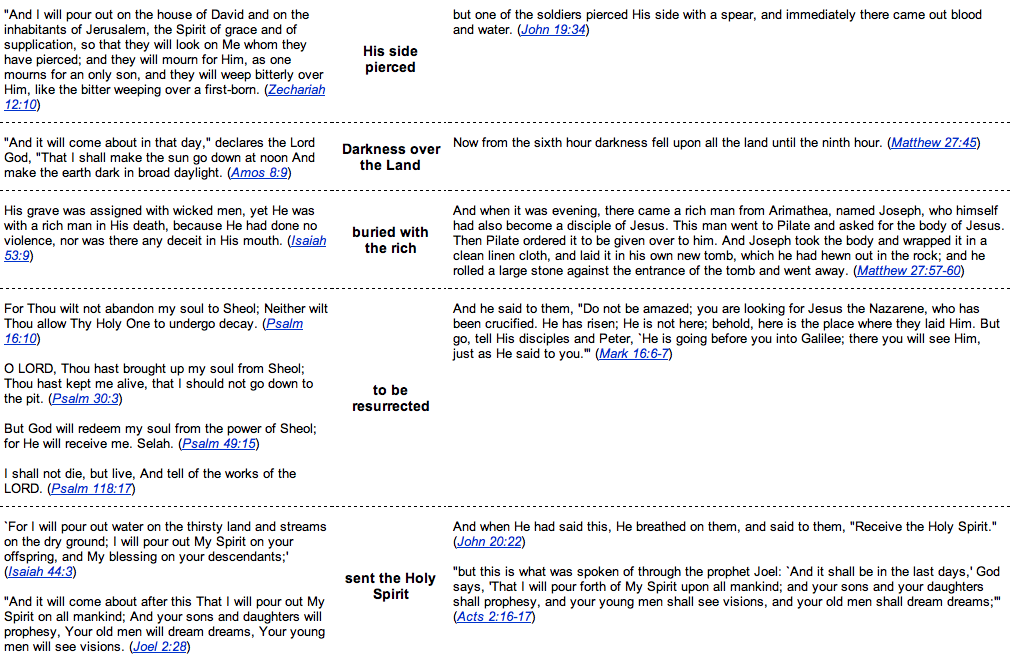